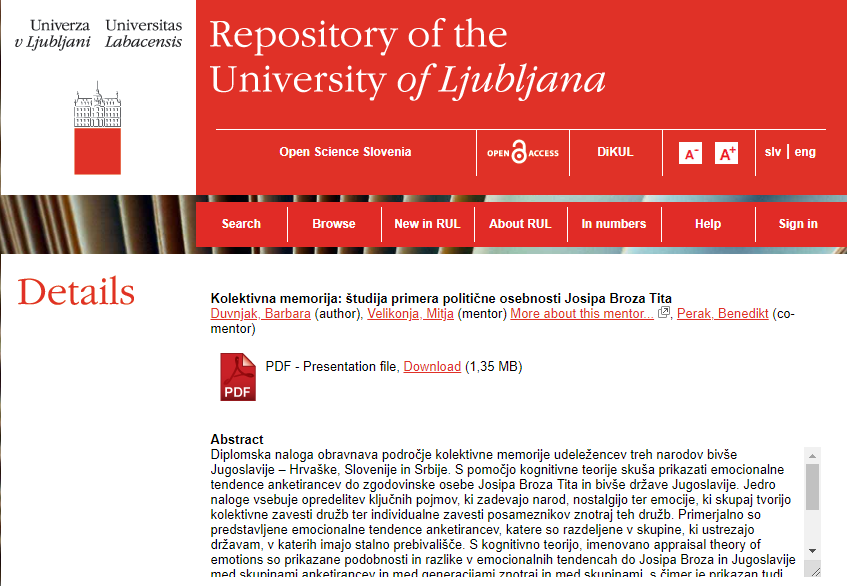 Abstract: The thesis addresses the field of the collective memory of the participants of three former Yugoslav republics – Croatia, Serbia, and Slovenia. Using a cognitive theory, it attempts to portray emotional tendencies of questionnaires toward the historical figure Josip Broz Tito and the former Yugoslavia. The core task is definitions of key term regarding nations, nostalgia, and emotions, which together form collective frameworks of societies and individual frameworks of individuals within these societies. I comparatively presented emotional tendencies of interviewees in my study and distributed them into groups which correspond to their countries of origin. Using the cognitive theory, named the appraisal theory of emotions, I strived to portray similarities and differences in emotional tendencies toward Josip Broz and Yugoslavia, both between groups of respondents and between generations within and between groups, and, in this way, acknowledged the transfer of memory through generations. I managed to confirm one of the two hypotheses I set up while the other was rejected. Throughout the study, I confirmed the hypothesis that the video of Tito’s speech acted as a significant stimulant for emotional tendencies among respondents. The hypothesis that the memory of Tito depends on our national background, I rebuked through the comparison of emotional tendencies of the participants in the study. The memory, as I have found, is influenced by several elements, such as nostalgia, the transfer of memory through generations, and today’s reality of individuals’ lives.